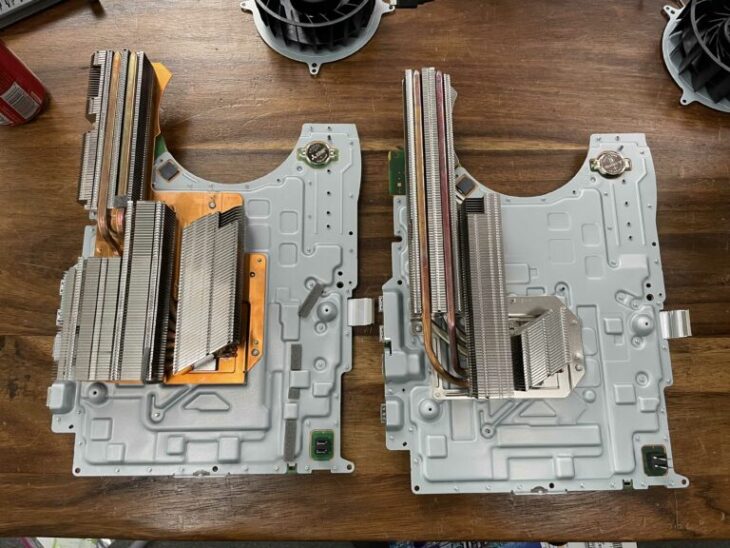 A tech YouTuber has performed a detailed breakdown of the new PS5 model that’s now being distributed in Japan and Australia. The content creator has discovered that changes made to components could mean that the console is worse off than the base models in some ways.

It was found that the console has small changes to the fan design and wi-fi antennas. These new wi-fi antennas could indicate that a wireless communications module will be launching for the PS5 later this year.

The most significant change is the 300g drop in weight between this new model and the standard models. It’s been found that this weight loss comes from a lighter heat sink that’s used in these consoles.

The heat sink is a crucial part of any console. It draws heat away from the CPU and GPU so they can run more efficiently. It also prevents them, usually, from overheating and causing irreparable damage.

One comment that fans had about the original PS5 models was that they produce a lot of heat. In fact, the SSD expansions that were recently launched require an additional fan because they run so hot.

These new PS5 models use a much smaller heat sink than the standard models. This is probably to save costs on parts as well as weight, since the console is far from light as it is. Considering the consoles only made a profit in June, it’s not hard to see why Sony would want to reduce the cost where they can.

While the tests are far from conclusive, this tech YouTuber found that the new PS5 models produce a temperature roughly 3 degrees celsius higher than the standard models. However, this could mean that the console is simply better at pushing heat out, rather than much of it remaining inside.

The conclusion of the analysis is that Sony has likely made changes to incorporate a wi-fi enhancement in the future. This reduced heat sink will be based on years of data from the PS4, and is probably a change Sony has decided to make because it knows that the console can handle it. Time will tell if the console manufacturer is right on this count.