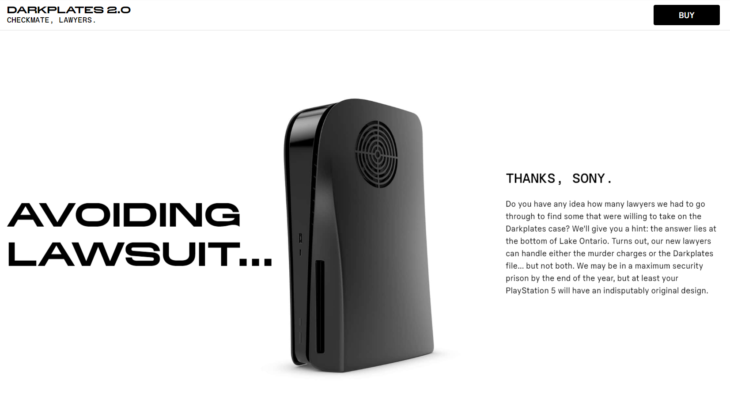 Sony has issued a cease-and-desist order against the tech peripheral creator Dbrand over its black faceplates for the PS5. Dbrand shared the letter online to demonstrate what was happening to fans and customers. In it, Sony accuses the company of counterfeiting, trademark infringement, tradesmen dilution, and unfair competition.

Sony is requesting that Dbrand promptly and permanently cease all promotion and marketing of its PS5 faceplates and any other products with the PlayStation logo. The letter adds that Sony is entitled to claim various forms of damages from Dbrand if it wants to. This part reads more like a threat of what Sony will do should Dbrand not end all of its production immediately.

The faceplates in question are black and branded as Darplates. They’re something that PlayStation fans wanted for the PS5 even before its launch, but Sony failed to provide anything close to the product Dbrand offers. At the time these plates went on sale in February, the company was asked if it feared legal action from Sony, to which it responded “Sue us, Sony”. Whether it was this brash move that forced Sony’s hand, or that it’s just taken the company this long to identify what Dbrand is doing, is still up for debate.

Sony actually addressed the comment in its letter, stating that it felt it would be better for Dbrand to correct the situation itself before any further legal action comes into play.

The company has pulled the darkplates for now, emphasizing that there’s still a market for them. Sony’s actions have only made darkplates more desirable as a collector’s item. The plates are infamous and will always be associated with Sony stomping down on a smaller creator.

Dbrand certainly doesn’t seem to think that this can last, and that more faceplates will crop up before long, forcing Sony to do something about either all of them, or none of them. This could lead to the return of darkplates, but only time will tell.

Many content creators and press outlets have commented on the situation stating that fans would likely feel a lot more convicted about keeping a peripheral on the market were it for the Nintendo Switch, or another Nintendo product. It seems as though the premium brand that Sony has created hasn’t fostered the same sort of community, but Nintendo is also notoriously easy going when it comes to the third-party shells you can find all over Ebay for the Switch.