Take your friends to the carnival, explore an all-new Fallout 76 Season, and more in Nuka-World on Tour.

When a hard day out in the wilds of post-nuclear Appalachia gets you parched, there’s only one beverage fit to slake your wasteland-sized thirst: Nuka-Cola! Earn prizes, play games with friends, and of course, grab yourself a refreshment in Nuka-World on Tour, the latest free update available now for all Fallout 76 players!

What is Nuka-World on Tour?

Before the world was turned to cinders, Nuka-World was the premier theme park created by the Nuka-Cola Corporation. Wanting to share their love of Nuka-Cola’s classic taste with post-nuclear Appalachia, Nuka-World took the show on the road with its travelling attraction: Nuka-World on Tour!

Settling down in the Ash Heap, players can visit Nuka-World on Tour to play carnival games, mingle with other guests at the trading post, and even partake in three new Public Events! Keep romance alive (while possibly dealing with some potential mood killers) in Tunnel of Love, test your luck in a bloody gauntlet during the Spin the Wheel event, or play out a dastardly robbery right out of an old Western in Most Wanted. Every Public Event poses a challenge but pays victorious guests handsomely with new weapons, clothing, C.A.M.P. decorations, and more.

Visitors to Nuka-World on Tour can also spend a few Caps at the Nukacade, competing in games for that oh-so-coveted high score and even earn prizes such as their own arcade games to enjoy in their C.A.M.P.s! Last, but certainly not least, is the Ultracite Titan lurking beneath the attraction’s fairgrounds. Awaken the beast for rewards and bragging rights but know that “Titan” isn’t a cute nickname – this hulking beast is the largest Region Boss yet encountered in the game!

Nuka-World on Tour doesn’t just include a new attraction to visit, it also kicks off a brand-new season full of rewards for players to unlock! Earn S.C.O.R.E. in Fallout 76 to boost your rankings and unlock Atoms, C.A.M.P items, cosmetics and more in Season 11: Nuka-World! Learn more about Fallout Seasons here.

And there’s more! This update includes an exciting quality-of-life feature for all you crafty C.A.M.P.ers out there – free camera controls for building! Just press the button in build mode to toggle to the all-new free cam, making it faster, easier and more fun to construct your dream C.A.M.P.

Fallout 76 is available now for PC, Xbox One and Xbox Series X|S systems – play free today with Fallout 76 on Xbox Game Pass. For more Fallout news, visit fallout.com and be sure to follow Fallout on Twitter and Facebook. Enjoy your stay in Appalachia and at Nuka-World on Tour! 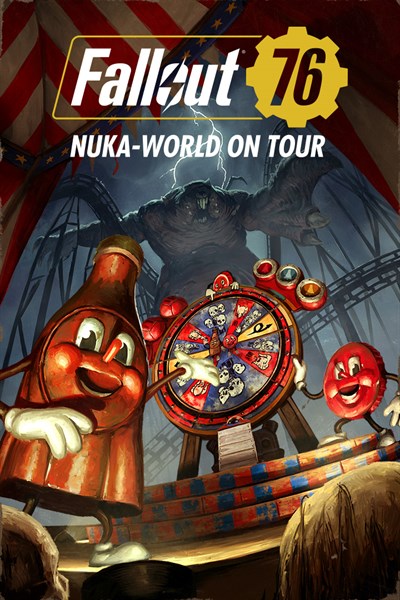 ☆☆☆☆☆ 827
★★★★★
$39.99 $31.99
Xbox One X Enhanced
Xbox Game Pass
Bethesda Game Studios, the award-winning creators of Skyrim and Fallout 4, welcome you to Fallout 76. Twenty-five years after the bombs fell, you and your fellow Vault Dwellers—chosen from the nation’s best and brightest – emerge into post-nuclear America on Reclamation Day, 2102. Play solo or join together as you explore, quest, build, and triumph against the wasteland’s greatest threats. Explore a vast wasteland, devastated by nuclear war, in this open-world multiplayer addition to the Fallout story. Experience the largest, most dynamic world ever created in the legendary Fallout universe. Immersive Questlines and Engaging Characters
Uncover the secrets of West Virginia by playing through an immersive main quest, starting from the moment you leave Vault 76. Befriend or betray new neighbors who have come to rebuild, and experience Appalachia through the eyes of its residents. Seasonal Scoreboard
Progress through a season with a completely free set of rewards like consumables, C.A.M.P. items and more, by completing limited-time challenges. Multiplayer Roleplaying
Create your character with the S.P.E.C.I.A.L system and forge your own path and reputation in a new and untamed wasteland with hundreds of locations. Whether you journey alone or with friends, a new and unique Fallout adventure awaits. Mountain Splendorland The story lives and breathes through the world of Fallout 76, which brings to life six distinct West Virginia regions. From the forests of Appalachia to the noxious crimson expanses of the Cranberry Bog, each area offers its own risks and rewards. A New American Dream
Use the all-new Construction and Assembly Mobile Platform (C.A.M.P.) to build and craft anywhere in the world. Your C.A.M.P. will provide much-needed shelter, supplies, and safety. You can even set up shop to trade goods with other survivors. Fallout Worlds
Play unique adventures in Appalachia with Fallout Worlds, which is an evolving set of features that give players the capability to play Fallout 76 in unique ways with customizable settings.