Hello, everyone. I am Michel Ziegler, the creator and developer behind Mundaun, a folklore-inspired horror game and my first full-length title as a one-man game development studio!

Mundaun has been a passion project for me since I began development in 2014. Every character, scene and even environmental textures in the game are hand-pencilled – you can imagine how much drawing I’ve had to do over the years.

It’s amazing to finally share the game with you all after working on it for so many years. Creating a game as a solo developer has certainly been an exciting journey, one with plenty of ups and downs. 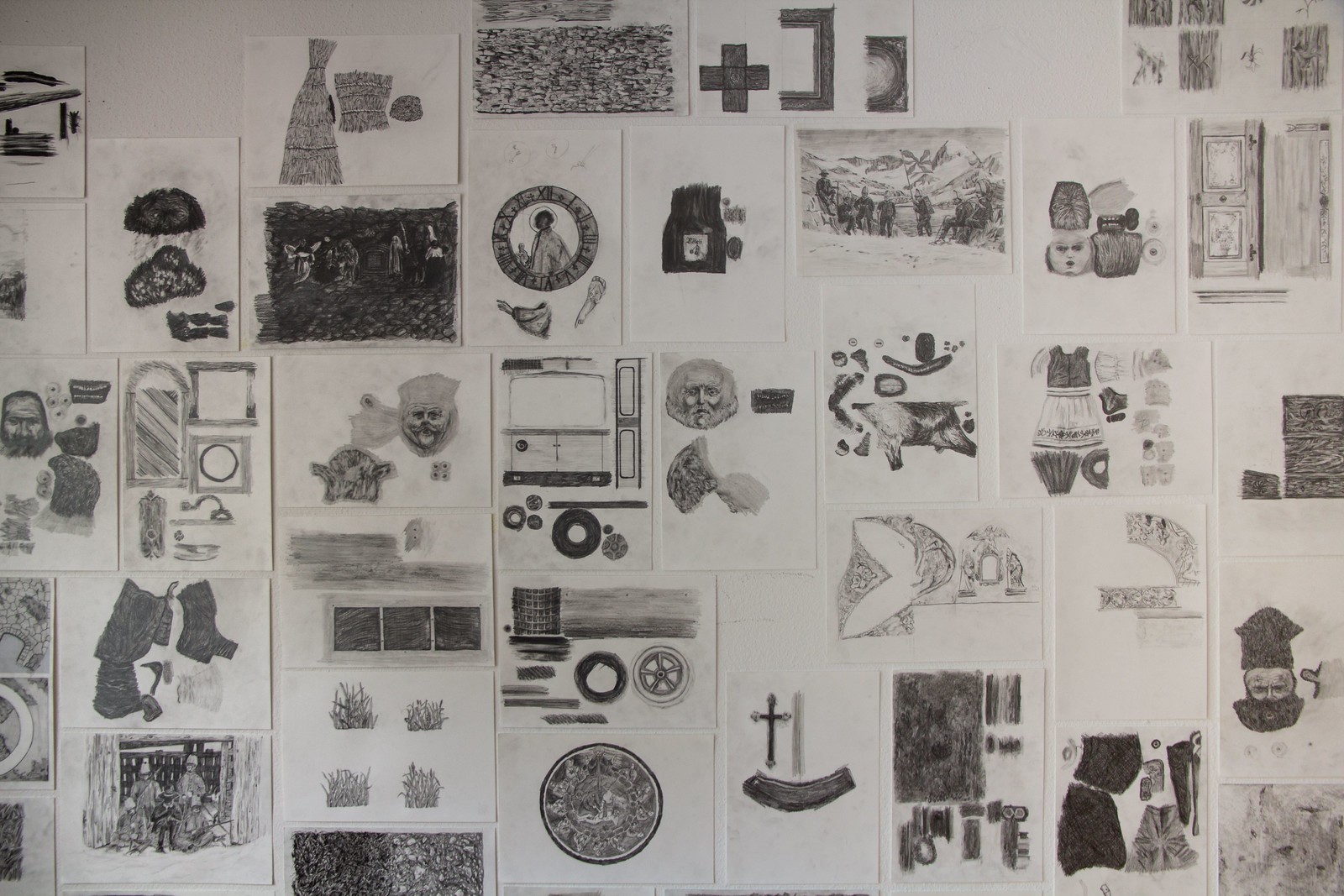 The Alps hold a special importance to me, and everything from Mundaun’s story to its characters and environments celebrate the remarkable culture of the Swiss region of Grisons. Mundaun is heavily inspired by the Alps’ rich history of myth and culture, and pays homage to the oppressive atmosphere of works like Jeremias Gotthelf’s “The Black Spider”.

In order to do so, I tried to gather as many books and references for many of the elements I’ve included in the game. I have been scavenging thrift stores over the years, and must have collected at least 50 books with old photographs from rural life in the Alps, which are my biggest visual inspirations for the look of the game. The atmosphere these black and white pictures have, to me, is a window into almost a different world, and I wanted to immerse myself in the world in a way. 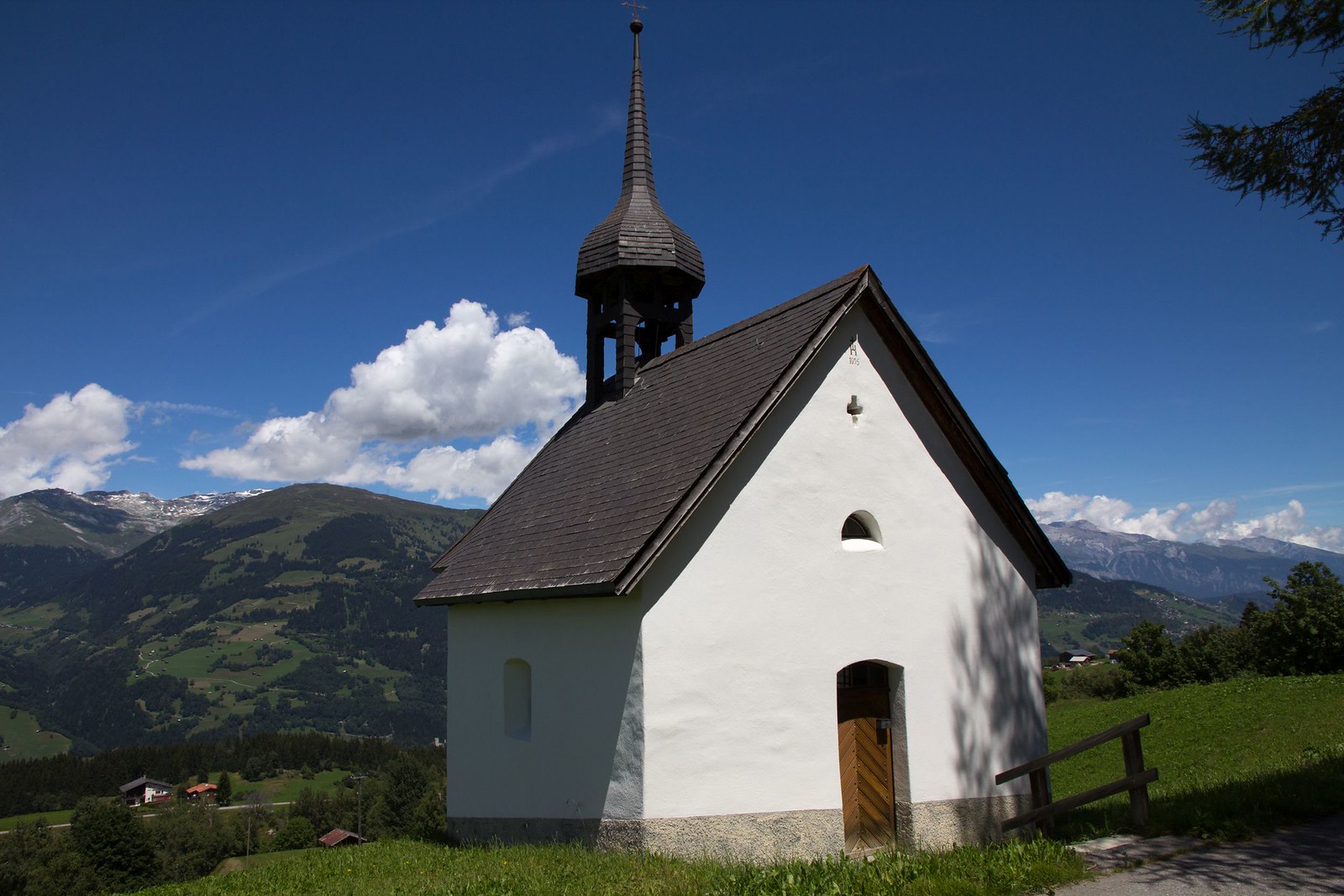 The chapel in Mundaun was the very first thing I modeled for the game. I didn’t really have a plan for a game, but I started to create this small piece of a world that featured a chapel, and the ideas continued to flow from there.

It’s still one of my favorite places in the game, and one where you can see that the game is entirely drawn by hand. Everything from the ceiling to the windows and the benches were inspired by this chapel in Platenga, which is full of these incredible drawings and paintings. It’s like a drawing inside of the game.

Another location in the game is the Painter’s House, which is a real house that was built and used by an artist named Alois Carigiet in the 1950s. He was a very well-known Swiss painter and illustrator of children’s books. He put a variety of drawings on the house walls, one of which inspired a puzzle in the game, which has you trying to get into the mysterious cellar of the painter’s house.

There are several real-life references like this in the game, and it was helpful to work off of these locations to make the world feel more real. I would travel to these places around three to four times every year to walk around, gather ideas and create reference photos from interesting things I encountered, including buildings, signs, little objects rocks and sun-scorched wood. 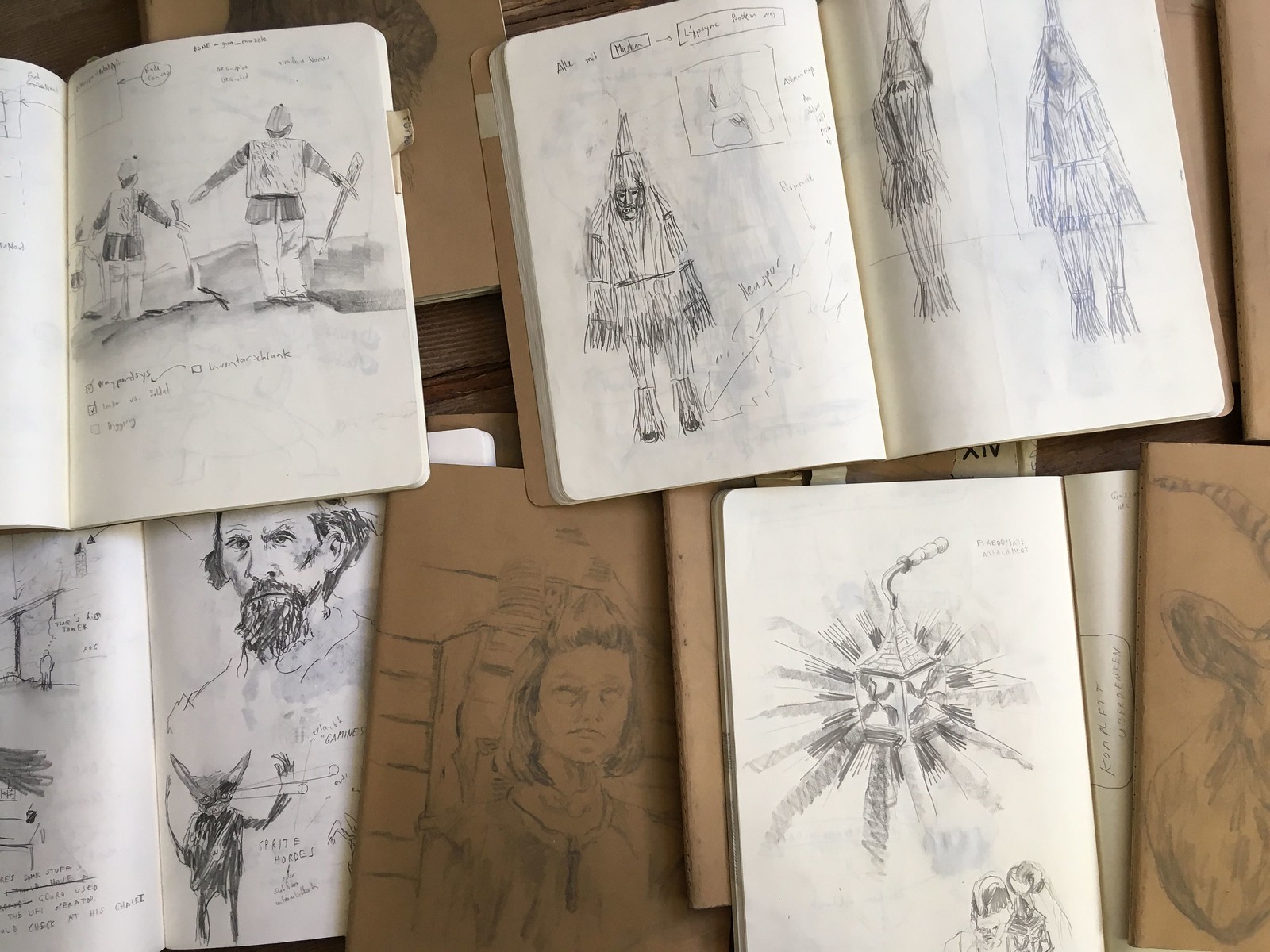 Drawing everything by hand

I originally studied software engineering and worked in that field for some years. It didn’t really suit me, and I had always wanted to create something, so I decided that I wanted to learn how to draw with the goal of creating comics. I hadn’t drawn anything since I was a child, so I had to learn and got into the Illustration BA in Lucerne, Switzerland. 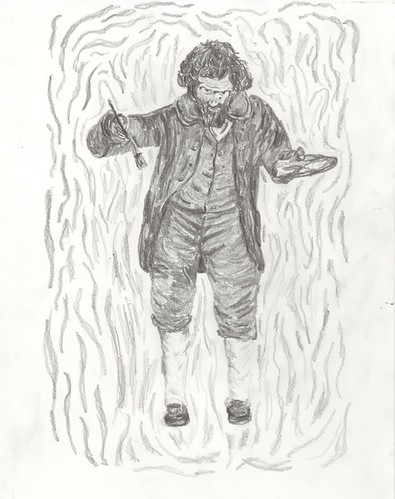 I have this deep passion for drawing because I like the unwieldy process with an element of randomness. Everything, from the sketches, to the smudges and eraser marks, there’s an element of surprise that you discover while working, and they feel natural to the creation process. The process of hand-drawing the textures and the resulting aesthetic is definitely very close to my heart.

There’s this old hotel in Mundaun that I remember as a child that has been abandoned for some time now that reminds me of the one in Stanley Kubrick’s “The Shining”; in fact, the first sequence of the game sees players arriving in Mundaun by bus, which was very much inspired by the film. 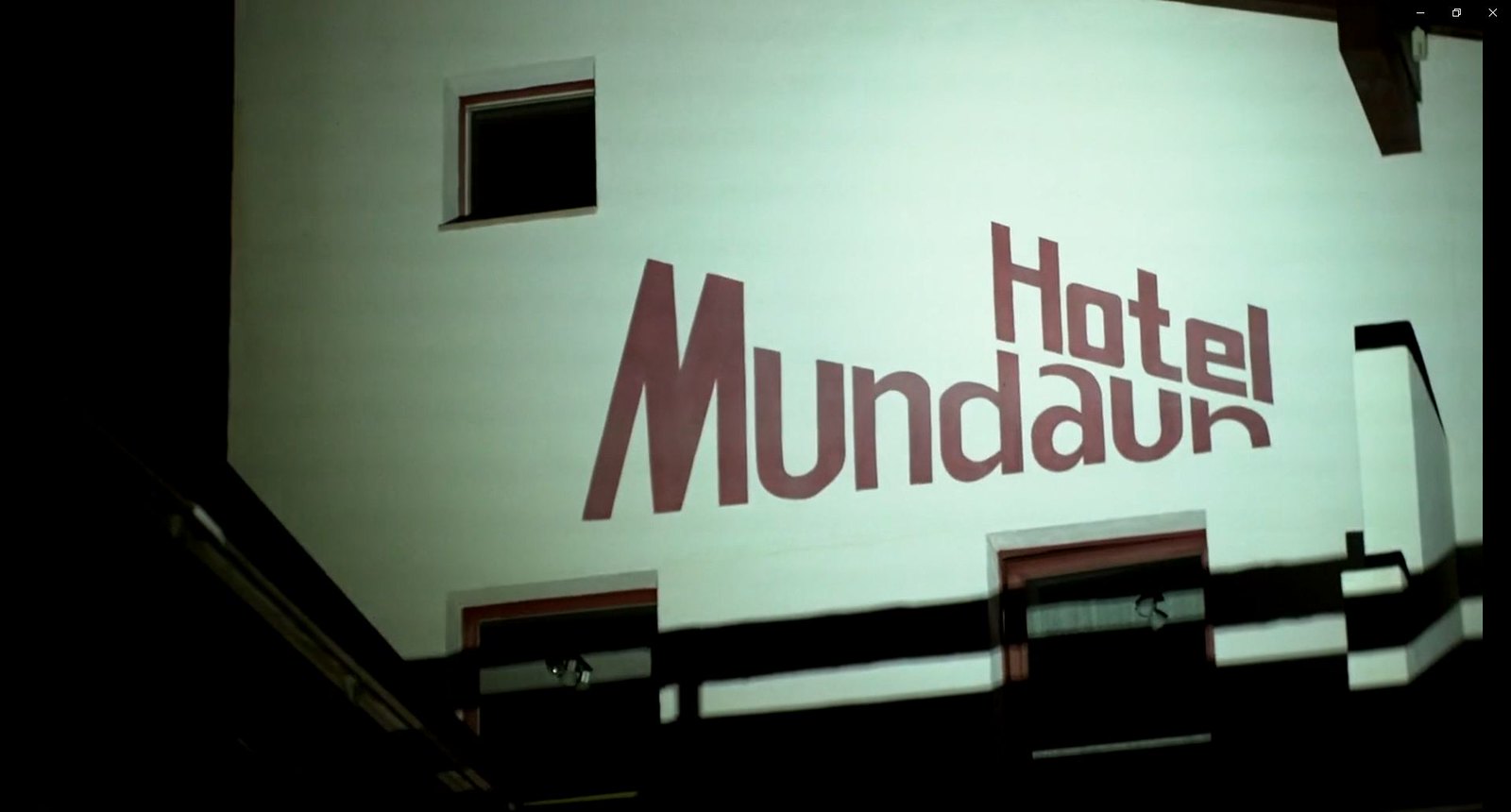 The whole area around the hotel, with the barns and the surrounding nature, served as an inspiration for the world. While we were filming a special behind-the-scenes documentary for the game, we were exploring the land around the hotel at night – probably not the smartest idea, now that I think about it – when a light in the hotel turned on, and we started to hear children’s voices. It was certainly very eerie.

Challenges as a solo developer

Early in the game’s development cycle, I reached this point of no return knowing that I had to finish it. But there were always moments of doubt and despair where I felt like I couldn’t finish what I set out to do. Game development, especially as a solo creator, is an emotional roller coaster. 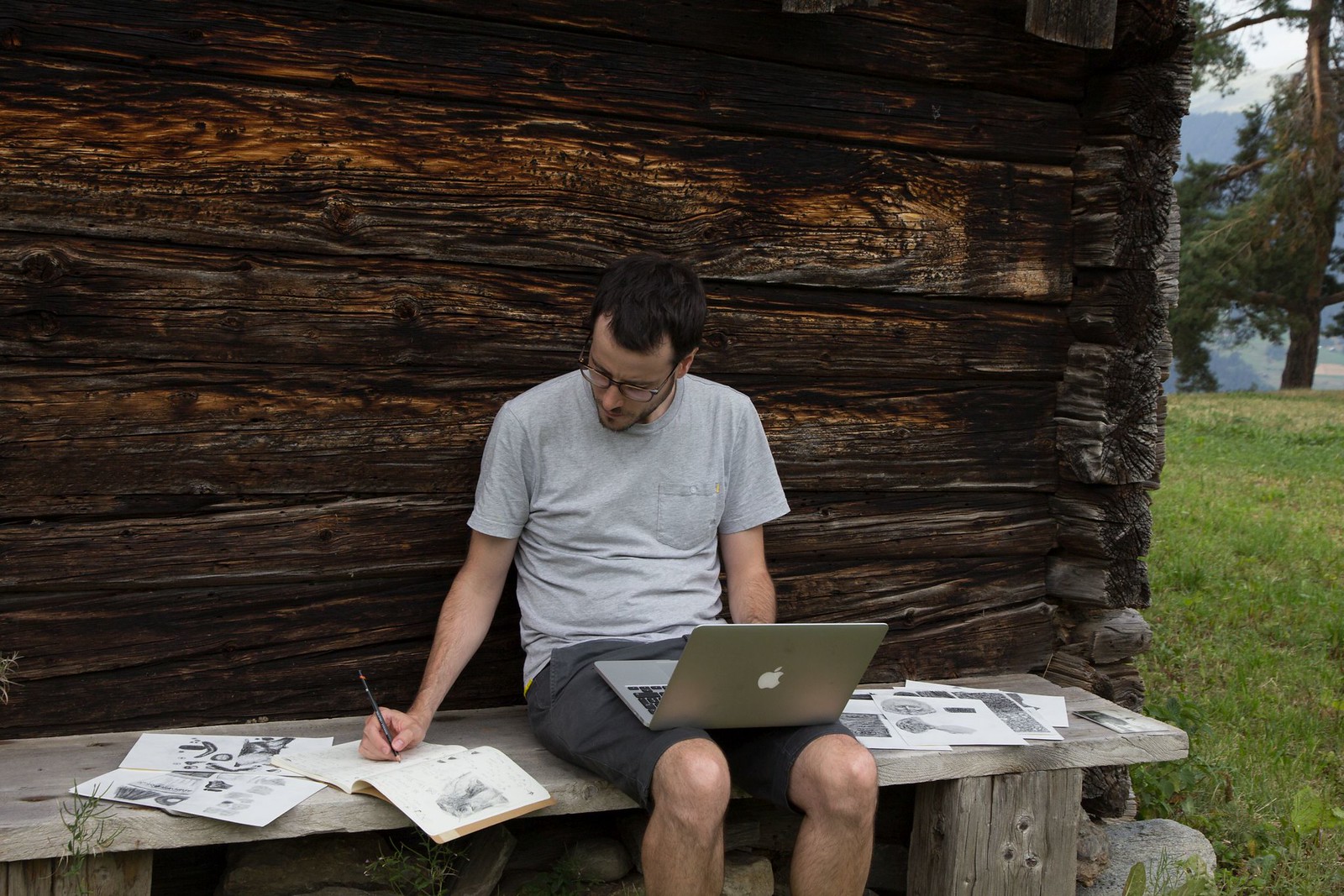 But I just really love this world, and seeing it gain depth and become fleshed out was a big motivation over the years.

Fortunately, I’ve been able to collaborate with some talented folks to help see the game to its completion and bring it to market, including story co-author Gabrielle Alioth, music composer Michel Barengo, sound design artist Eric Lorenz, Programmers Ryan Miller, Simon Hischier and Petr Karbula, and the wonderful team at MWM Interactive.