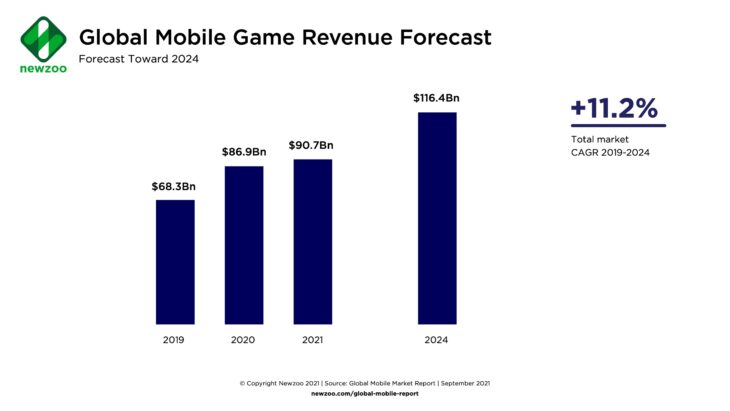 Newzoo, a market intelligence firm, has predicted that the global mobile gaming market is set to generate more than $116 billion by the year 2024. This news comes from the firm’s 2021 Global Mobile Market Report, which indicates that direct consumer spending on mobile games is going to rise by 11.2 percent from 2019 to 2024.

The company has already stated that it predicts the market to hit $90.7 billion for 2021. While not as significant an increase, it’s still a decent step up from 2020 which saw the market pull in $86.98 billion.

The growth of spending on mobile games looks like it will outpace the growth of the mobile gaming audience, with a 5.1 percent increase expected over this five-year period. It’s expected that this year’s total number of smartphone users will hit around 3.9 billion, moving up to 4.5 billion in 2024.

The firm also expects that 5G adoption will be fast. This is a contentious issue since there are many who believe that 5G spreads diseases and a number of other facts that have no evidence to back them up.

Newzoo also commented on the potential repercussions of Apple’s decision to blacklist Fortnite from the App Store until all court proceedings come to a clase, which could take up to five years.

The company believes that ultimately, Apple is going to be forced to open its payment system up for developers instead of sticking to the one it has in place and is forcing on all developers right now. The firm adds that companies like Apple are turning into content fortresses that control all the ads on their platform, and it’s unsustainable given the result of the Epic and Apple lawsuit.

Many developers already offer alternative methods of payment to Apple’s, and that’s something that’s going to become far more commonplace until Apple changes its policies.