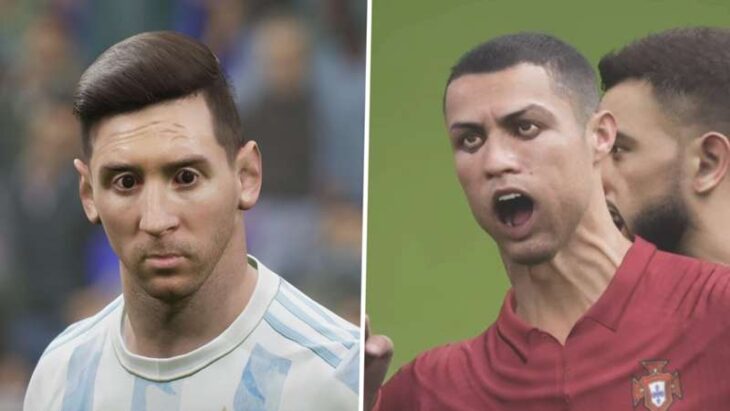 Konami has finally launched its free-to-play successor to Pro Evolution Soccer, and it’s being destroyed in reviews on Steam.

According to a site called Steam 250, which assigns games scores based on reviews from users in a similar way to Metacritic, the game has a score of eight percent. This brings it below the worst-rated PC game on the platform until eFootball’s launch, FlatOut 3, which had a score of fifteen percent.

The game has been picked apart and left for vultures on social media for one key reason, facial animations. For whatever reason, the likeness of each footballer is slightly off, making them look far more comical than they need to in a football simulator. Furthermore, the actual animations themselves make the players look inhuman, like they’re aliens trying to act like humans.

The most prevalent image being used to broadcast the game’s issues is a comparison between cover star Messi in eFootball and FIFA 22, showing a clear drop in quality in Konami’s release. Some fans have pointed out how other footballers look more lifelike in FIFA 22 despite Konami physically scanning some players like Messi to use in its game.

The game has been hit with over 4000 reviews so far, with only 350 of those being positive.

The publisher has responded by stating that the game is little more than a demo at this point, but would be improved upon with post-launch patches and updates. Still, there are animation issues with the game that make it look funny, but should never appear in a game that will be in the hands of actual players.

The crux of the issue is that this is a title that Konami is expecting players to spend money on via in-game microtransactions. When a game looks and plays as badly as eFootball does, there’s little reason to invest because it looks like the game has been dropped by the developers.

Right now, the game feels like a title that Konami has pushed out of the door too early in need of a financial win. However, it’s likely that by doing this, it’s only going to harm the game’s reputation and make it even more difficult to recoup the development costs, let alone make a profit.