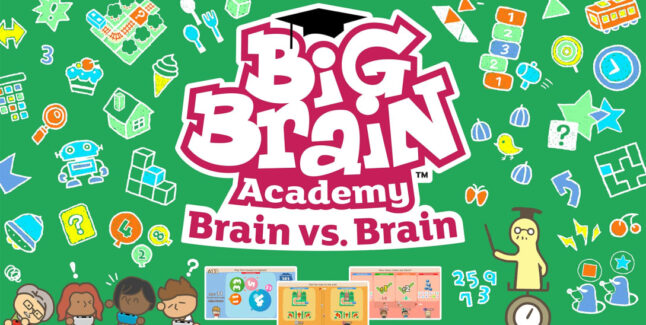 Nintendo has announced “Big Brain Academy: Brain vs. Brain” for the Switch. The worldwide release date is set for December 3, 2021. Meanwhile “Dr Kawashima’s Brain Training for Nintendo Switch” has yet to be released in the USA.

In the new game that does get a global release, you’ll be able to engage in a battle of wits with your friends and family when the Big Brain Academy: Brain vs. Brain game comes out later this year.

Challenge yourself with brain-teasing activities in Solo mode, take on random players online* in Ghost Clash, or go “brain vs. brain” with up to four players in Party Mode. In this mode, you’ll try to earn the highest points by quickly completing activities. With the ability for each player to set their own difficulty level, brainy champs of all ages and skill levels can play together and test their mental mettle.

Watch the trailer if you want to see what a brawny brain battle looks like:

Treat your brain to some quick mental fun

Get your own Big Brain Brawn score with a fun test. Boost your skill and speed by practicing certain activities. Of course, you can also prep for your next multiplayer brain battle or compare scores with friends and family. Unlock dozens of outfit options for your in-game avatar — from a cat outfit to a corn costume!

Go brain vs. brain against mind-masters near and far

Are you a Brain Training series fan?

I’ve loved it since the Nintendo DS original. My brain is no longer 80 years old. 😉